LIMASSOL, January 22, 2016 – The EuroAsia Interconnector project has commenced its implementation, with the research vessel launched that will conduct the charting survey of the seabed where the 2,000 MW duo-directional electricity cable between Israel, Cyprus and Greece will be laid. 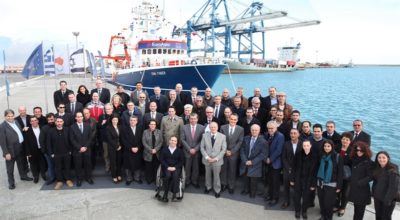 The Italian research company G.A.S. S.r.l. is embarking on the pre-works phase surveys for the 1,518 km subsea power cable that will end the energy isolation of the three countries by connecting their power grids to those of continental Europe.

The three studies are for the technical design, the reconnaissance study for the optimum route and an environmental impact study, all of which are expected to be completed during 2016.

During a historic ceremony in Limassol port, the Italian-flag research vessel Odin Finder and its 25 crew and scientists was presented to Cyprus Government and European Commission officials in the presence of the Ambassadors of Italy, Greece and Israel.

The vessel will set sail from Limassol port and will take about 100 days to complete the survey.

Present at the inaugural ceremony was the Director General of the Cyprus Energy, Commerce and Tourism Ministry, Dr Stelios Himonas, who emphasised the important role that Cyprus will play in determining regional energy issues, particularly in the eastern Mediterranean.

In his address, EuroAsia Interconnector CEO Nasos Ktorides added: “This picture of this ship in the Limassol port is worth an enormous sense of security and progress to three countries and two continents. It also reflects businesses and millions of people prospering from this important electricity highway.

“We have successfully managed to get through the overwhelming maze of plans and we are now sailing steadily into the final three studies before launching the implementation phase of the EuroAsia Interconnector, a European Union Flagship Project of Common Interest.

“We consider the completion of the EuroAsia Interconnector as the beginning of the Global Energy Interconnector,” Ktorides declared, adding that this project “demands a network of specialists, institutions and of course, governments, all actively supporting every step. We, as a team, are grateful to the European Union for embracing this project as its own and labeling it as ‘of Common Interest’ and to our international consultants for infusing it with their expertise and care.”

On November 18, the European Commission released a revised list of the Projects of Common Interest (PCIs) across the EU that included the EuroAsia Interconnector, based on their “significant benefits in market integration and enhancing competition improve security of energy supply and reduce CO2 emissions.”

This project also offers economic and geopolitical benefits to the involved countries and contributes to the European Union’s target for 10% of electricity interconnection between member states.

The cable is expected to be laid at a depth of up to 2612 metres below the sea and the involved governments are considering expanding the project after its completion in order to double its capacity.

The Ambassadors of Israel, Greece and Italy – Yael Ravia-Zadok, Ilias Fotopoulos and Guido Cerboni – as well as the Deputy Governor General of Crete for Energy and Industry, Virginia Manasaki, all expressed praise for the speed of the project.

Israeli Ambassador Ravia-Zadok said she was “amazed” by the sheer size of the project and the research undertaken, adding that it was of “utmost importance” to Israel, Cyprus and Greece.

“Italy supports and considers as a priority building a resilient Energy Union, based on the dimensions of security and solidarity, a fully integrated internal energy market, energy efficiency, de-carbonisation, research, innovation and competitiveness. It is essential to strengthen cooperation not only between member states, but also with neighbouring countries that are traditional partners in energy relations,” said Ambassador Cerboni, and added:

“As the Ambassador of Italy, I have an additional reason of satisfaction: EuroAsia InterConnector has awarded the studies for the technical design, the reconnaissance study for the optimum route and an environmental impact study, to two Italian companies, CESI S.p.A. (a company from Milano with more than 50 years of experience in testing and consulting services for the electrical industry) and GAS S.r.l, from Bologna province, a company of solid experience worldwide in geophysical, geotechnical and environmental surveys.”

Speaking from the pier where the vessel is docked, Greek Ambassador Fotopoulos said: “The Odin Finder (right next to us) will not just determine the preferable route for an electricity cable. It is actually going to determine the preferable route for connecting the peoples of Greece, Cyprus and Israel. It would be fair to say then that we are all embarking on a historic expedition.”

Work on the initial 329-kilometre cable link between Israel and Cyprus is expected to begin in 2017 and be completed in 2019. The second phase will connect the island of Crete to Attica in mainland Greece in 2020 and the third and final phase will connect the cable from Cyprus to Crete with a view of full implementation of the “electricity highway” by 2022.

The expected cost of step one and step two of the project is 1.5 bln euros and will be undertaken in full by EuroAsia Interconnector.